MDC awards 2018 statewide outreach partnership award to Fox 2 & KPLR-11 in St. Louis
Posted by Unknown at 5:22 PM No comments: Links to this post 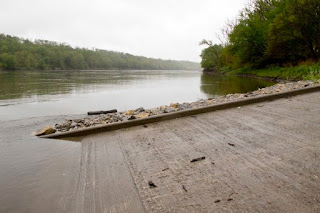 St. Joseph, Mo. – The Missouri Department of Conservation (MDC) has closed several conservation areas in the state’s northwest region due to Missouri River flooding. Some areas are under water, others are inaccessible or will remain closed due to public safety issues until further notice.

MDC staff on March 19 continued to work with local farmers and the levee district to keep flood water from overtopping or breaching levees protecting farms and the Bob Brown Conservation Area near Forest City in Holt County. But other conservation areas to the north are flooded, said Blaine Adams, MDC disaster response coordinator. Some of those areas include flood plain acreage between the river and levees, while other areas are behind levees that have been breached by floodwater.

“About everything in Atchison County west of Interstate 29 is under water or is going to be soon,” Adams said of MDC areas.

MDC has also closed the Cooley Lake Conservation Area boat ramp in Clay County in the Kansas City area due to high water.

The following conservation areas or river accesses with boat ramps are closed in northwest Missouri.

Register today for a free opportunity to learn safe handling and shooting techniques.

COLUMBIA, Mo. – The Missouri Department of Conservation (MDC) invites women to a free, basic shotgun workshop near Columbia on April 2. The program will begin with a brief classroom session at 6 p.m., followed by a live-fire session at a local shooting range.

Participants will learn about shotgun safety, handling, and shooting skills. This for-women, by-women workshop is designed for beginner and intermediate shooters.

“This class is for ladies and taught by ladies,” said MDC Conservation Education Consultant Emily Porter. “We want to provide a place to learn, ask many questions, and feel comfortable while trying something new. Shotgun shooting is a sport that hunters and non-hunters alike can enjoy.”

Following the classroom portion, ladies interested in advancing their knowledge on the range will have the opportunity to challenge themselves at trap and skeet shooting.

Firearms and ammunition will be provided, though participants are welcome to bring their own shotguns, cased and unloaded.

This workshop is free and open to women-only of all ages. Participants must preregister at mdc-event-web.s3licensing.com/Event/EventDetails/166417. With questions or for more information, contact Porter at (573) 815-7901, ext. 2964.

Posted by Unknown at 6:25 PM No comments: Links to this post

KIRKWOOD, MO.—The Missouri Department of Conservation’s (MDC) Powder Valley Conservation Nature Center will host the Missouri Waters multimedia program featuring the Two Bobs Friday, April 5 at 7 p.m. The program is free and open to anyone age 12 and up.

It will be an evening of music, song, photographs, and thoughts on the beauty, health, and future of Missouri’s streams and rivers. The presentation is performed by the duo of Bob Ranney and Bob Korpella, both members of the Springfield Plateau Chapter of the Missouri Master Naturalists.

The Two Bob’s bringing together their diverse talents in one performance is truly a case of the whole being greater than the sum of the parts.

Ranney, a musician with a life-long passion for environmental quality, will perform music he has composed while spending years on our rivers. He’ll also share his insights about both the past and future of Missouri’s waterways.

Korpella is a chronicler of environmental issues as a photographer and freelance writer. He will present slides of his nature photography as well as experience and insight he’s gained on water quality from monitoring Missouri’s streams.

The duo will also bring real specimens of aquatic larvae and nymphs to give visitors a closeup look at these tiny creatures, which play a big role in the health of streams and revealing water quality.

Missouri Waters, a unique, educational, and entertaining multimedia experience, proves that two Bobs are even better than one.

Advanced online registration is required by going to https://bit.ly/2BR4x1C.

Powder Valley Conservation Nature Center is located at 11715 Cragwold Road in Kirkwood, near the intersection of I-44 and I-270.

Posted by Unknown at 6:11 PM No comments: Links to this post

Free April 3 clinic at Walter Woods Conservation Area has tips for all levels of experience.

JOPLIN, Mo. – Spring turkey hunting involves a variety of skills. Knowing how to locate a gobbler and call him into range, knowing how to handle firearms in a safe fashion, and understanding the turkey hunting regulations are all parts of a successful and safe hunt.

Hunters can learn more about the fundamentals of this popular spring pastime at a free Missouri Department of Conservation (MDC) clinic from 6-10 p.m. April 3 at MDC’s Walter Woods Conservation Area in Newton County. Topics covered at these programs will include calling, locating, firearms safety, hunt preparation, identifying legal birds and improving your shooting skills. People can register for this program at:

To get to Walter Woods Conservation Area, take Newton County Highway NN south from Redings Mill for 1.25 miles, then turn west on Dutch Elm Drive, which leads to the area. This workshop will provide good preparation for those wishing to participate in Missouri’s youth-only turkey season, April 6-7, or the state’s regular spring turkey season, April 15-May 5.

People can learn about other events organized by MDC’s Shoal Creek Conservation Education Center by calling 417-629-3434. More information about turkey hunting can be found at https://huntfish.mdc.mo.gov/hunting-trapping/species/turkey.

Posted by Unknown at 6:03 PM No comments: Links to this post 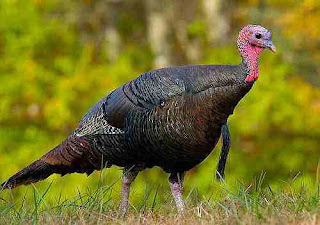 For the second consecutive year, I had the pleasure of attending the Turkey Creek Longbeards banquet, held recently at the Joplin Elks Lodge.

One of the highlights was hearing a turkey story by Terry McGinnis, who was born in Joplin and raised in Webb City. He currently lives near Diamond.

Terry approached and said that I looked familiar. In no time, he and I bonded. We are graduates of Webb City High School and, of course, avid turkey hunters.

He noted that he and his wife, Honie, had “a heck of a hunt” for longbeards last spring in Southwest Missouri.

On the opening morning of spring turkey season, the couple was well-concealed, sitting in a blind in a brushy fence roll.

READ MORE
Posted by Unknown at 12:25 PM No comments: Links to this post